Today's Oils and Our Classic Cars

George Morrison, an independent STLE Certified Lubrication Specialist from AV lubricants Co. presented an interesting and informative tech session with approximately 25 COMGO members in attendance, with questions and answers on lubrication an issues regarding our British cars.

George started by stating that lubrication technology and terms have changed greatly over the last five to ten years. Formerly there were two types of material for lubrication: Mineral based, and Synthetics. Currently the mineral based products have grown and are classified as Group 1, Group 2 (higher refined than Group 1), and Group 3 (higher refined than Group 2, with some properties nearing that of synthetics, and can legally be labeled as "synthesized", or synthetic). The pure Synthetics are classified as Group 4.

In the numerical classification system, e.g. 10w30, the "W" originally stood for winter. As most of us know, the numbers stand for the material's viscosity. In regards to mineral oil, when mineral oil gets cold, it becomes thicker, and has a higher viscosity. The base weight, in this case the 10. When the oil is manufactured it begins as a base weight "10 Weight" oil. In order top be a 30 Weight with greater viscosity when the temperature increases, plasticizers (which were described as microscopic plastic coils) expand, and the result is reduced thinning. The lower the base weight, the more plasticizers (longer coils) needed for a given increase. But keep in mind that the plasticizers will break down over time, and with heat, and the longer the coils, the more susceptible they are.

In regards to (pure) synthetics, when temperature decreases, the viscosity remains about the same. As the temperature increases (oil is tested up to 200 degrees), the viscosity still remains about the same, so the differences in synthetic weights is generally just labelling and marketing for warranty and perception. A synthetic 10w30, or a 5w30 is basically a 30 weight oil. Also, synthetics have a better attraction to metal and adheres, or coats, the surfaces better over longer periods of time. 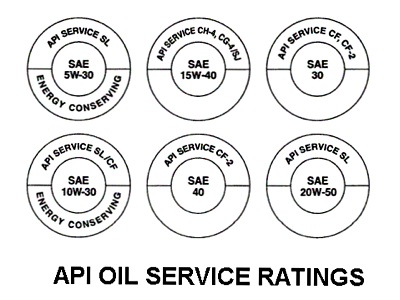 When questioned, George recommended Group 4 synthetics for our cars, or in fact any vehicle for which we care for, or plan to keep for a long time. His reasoning in part was:

George continued by stating that since synthetics don't get as contaminated, and doesn't wear out as mineral oil does, as a result you can go longer between changes particularly if you use a high quality oil filter. Most quality filters can go up to 10,000 miles, he says Amsoil's AEO line tested best on the market currently. Even though synthetics will remain cleaner than mineral based oils, it will become dirty due to ingestion of dirt into the engine through the air intake tract. An oil analysis, which usually costs less than $20, will report the contamination levels and thus the proper oil change intervals.

Special note: While oils are classed into four groups as described above, the group classifications are not listed on the product labels. The only way to determine what classification an oil is, is to carefully review the product's material data sheet (if you know what to look for). George did state that Mobil 1, Amsoil and most of Redline's oils are all Group 4, while all other readily available synthetics he has tested were actually Group 3 mineral based oils, labeled as synthetics.

Other notes of interest:

By Jim Nibert and Rob Meier

— Today's Oils and Our Classic Cars —
Written by Rob Meier – Created 2010-05-12 Published 2010-05-12
Contents © Copyrighted and published under the following terms:
Released under the terms of the CC Attribution-NonCommercial-ShareAlike 2.5 License

Comments on "Today's Oils and Our Classic Cars"

Member Comments on Today's Oils and Our Classic Cars   ↵
Rated 8.5 out of 10 based on 2 ratings
2012-05-30 13:51:01 # 6225
Comment by Art Dickenson
I have heard that shell 10 40 is a good oil to use esp in engines with flat tappet cams, apparently they say there is less shearing off action from the cam lobes...what do you say... Artjag
2014-02-12 22:27:41 # 14104
Comment by Skye Nott
Rating: 9/10
I've always used Castrol GTX and Rotella T, no complaints
2014-02-12 23:59:54 # 14105
Comment by Keith Meyer
Rating: 8/10
Looking through my MGTF and MGA service manuals they both state to use 30 weight motor oil. However todays oils are multi viscosity e.g. 10W - 30 etc. Therefore what multi viscosity oil is appropriate to replace the 30Wt oil specified? Thanks.
2014-02-13 10:49:26 # 14111
Comment by Rob Meier
The article was based on Georges comments as a lubrication specialist. I in my own research since do not totally agree with everything he said, as it deems the zddp replacements in real use do not actually work better for our cars(info from many engine builders who were seeing increased cam failure rates untill seeking out oils with higher levels of zddp, and a subsiquent reduction in failures)including with synthetics. I stick with Valvoline Vr1 racing 20w-50 as that seems to be working very well for engine builders and hobbiests, with some hard testing data to support it.
2014-02-13 15:01:39 # 14124
Comment by Skye Nott
Keith, a weight range means an oil is appropriate for all of those applications (oil technology
has advanced significantly). 20W50 is a commonly used weight, and the recommended 30W
falls close to the middle, which means you can use it all year (lighter for winter when the oil is
cold, heavier for summer when temps are higher) instead of changing weights by season in
the old days.
2015-05-27 17:25:21 # 26266
Comment by Rick Coshow
Leaves me a little puzzled. The new camshaft and lifters I bought for my B came with a warning that I should use an oil with zinc phosphate because of the solid (non-hydraulic) lifters. No mention of synthetic as an alternative.
2015-07-10 10:49:42 # 27361
Comment by Steve Goldfarb
In my research I came across an article on comparing motor oils syn vs dino...it was a study done by Consumer Reports....they put various types of motor oil in a fleet of new taxis in NYC. They initially disassembled the engine internals and measured them.They then ran the test for two years (about 30k mi), then pulled the engines out off a number of the cabs and measured the components for wear. Bottomline...they could not find any statistically relevent difference in the wear between syn or dino or could they find any difference relative to viscosity.
2015-09-05 14:13:19 # 28850
Comment by Duncan M
New Taxi's, or any vehicle with 30,000 miles is nowhere near enough miles to determine anything about wear and different oils. As usual, Consumers Reports has some agenda, and/or they do not understand what it is they are testing. And what does "statistically relevant difference in wear" supposed to mean? There was a difference, but we are not going to tell you is what it means. Next time, CR, leave the engines together, and run the different oils for 120,000 miles before you look for statistically relevant wear. BTW, zddp was removed from most oils because it wrecks catalytic converters.
2017-06-30 09:34:53 # 43221
Comment by Cambren Davis
I have been using Amsoil Z-Rod 20w50 in my TD with good results. It is a synthetic with ZDDP added.
2017-07-19 14:25:00 # 43691
Comment by Steven Pignataro
Rotella T for Diesel. Has everything in it that's good for your engine. Period!
2020-09-11 09:13:08 # 65959
Comment by alfred dawes
Thank You Duncan!Consumer Reports has improperly reported on engine oils for many years.My first issue with their report in 1988 seemed to leave me with more questions than they answered.Their information is of poor quality in this respect to those that design and make the oils and do the long term testing for their oil formulations to Exceed API, which is just a minimum oil rating. Kinda' like everyone gets a participation Trophy by paying for the "API rating" to be put on the oil label. The API rating does raise the price of the oil though when it is used. Meaningless for Quality standards IMO.If it was a quality of Excellence mark, then Warren and the Dollar General oils would not meet it quite a few times.